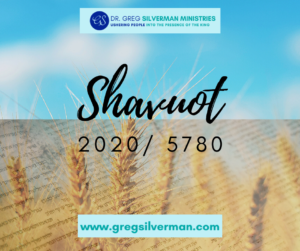 This Thursday night at sundown begins the Biblical Festival of Shavuot (Pentecost).  Most Christians understand that Shavuot-Pentecost was the giving of God’s Holy Spirit to Believers.  However, this is also the Biblical Festival when we remember the giving of the Torah, the Word of God at Mount Sinai in the Old Testament.  In Acts 2 the giving of the Spirit came together with a sound from heaven like a mighty rushing wind.  In Exodus 19, the preparations for the giving of the Torah were accompanied by a sound from heaven of an exceedingly loud shofar (Exodus 19:16, TLV).  So, God gave the Word and His Holy Spirit at Shavuot-Pentecost.  Not only would I like to know more about His Word and His Spirit, but I would also like to know more about these sounds from heaven that He provided.

Earlier this month, Alexandria Tava interviewed me for her new podcast, Let’s Talk Sound.  She interviews different people from various walks of life.  Click here to check out the episode that includes her interview with me, which will be aired publicly this Monday, June 1st.

Preparing for the interview got me thinking about the power of music and the power of sound again.  As a full-time musician and worship leader, I exist and operate in the moment in sound as part of my daily life.  In addition to that, every now and then, I stop and consider the power of sounds.

I was reminded of Scripture from Genesis 1 and 2 that God created the heavens and the earth, not through some building project or with a construction company, but by speaking words into existence which became things in existence.  His WORDS contain creative power.  In God’s way of doing things, words become things.

In Hebrew, the word for “word” is devar.  However, devar not only means “word” but it also means “thing”.  God’s creative power through words is so much part of the Hebrew mindset, that the words for “word” and “thing” are literally one and the same.  God has created you and I in His image, and we too create substantial things through words.  Consider the words of James 3:5-12 (TLV), about our tongue and the power it has:

So also the tongue is a small member—yet it boasts of great things. See how so small a fire sets a blaze so great a forest!  And the tongue is a fire. The tongue is a world of evil placed among our body parts. It pollutes the whole body and sets on fire the course of life—and is set on fire by Gehenna…  But no human being can tame the tongue. It is a restless evil, full of deadly poison. With it we bless our Adonai and Father, and with it we curse people, who are made in the image of God. From the same mouth comes blessing and cursing. My brothers and sisters, these things should not be. A spring doesn’t pour out fresh and bitter water from the same opening, does it? My brothers and sisters, can a fig tree produce olives, or a vine produce figs? Neither can salt water produce fresh water.

Anyone who is honest will tell you how much impact certain words have had on them.  What is a primary way that we bless one another?  Through the words that we speak.  What are some of the things that have hurt me the most?  When someone has used destructive and hurtful words against me.  Words have power to create and to destroy.

Sounds not only have creative power, but sounds also have unifying power.  When I was in college at the University of Massachusetts, I was in the UMass Marching Band!  Three hundred members strong.  How were we all able to march in step as we traveled down the street to go to the football stadium on Saturday mornings?  We were in unity because of the sound of the cadence from the drum line.  Sounds bring people into alignment.  They bring unity.

When the day of Shavuot had come, they were all together in one place. Suddenly there came from heaven a sound like a mighty rushing wind, and it filled the whole house where they were sitting. And tongues like fire spreading out appeared to them and settled on each one of them. They were all filled with the Ruach ha-Kodesh and began to speak in other tongues as the Ruach enabled them to speak out. ~ Acts 2:1-4 (TLV)

God brought forth the sounds of unity and life in and through His disciples at Shavuot-Pentecost.

Oh God, use me to be a good steward of the words and sounds that You have put in and through my life.  And may we continue to hear Your sounds from heaven in our day and at this time, in Yeshua’s Name.

All for the King,